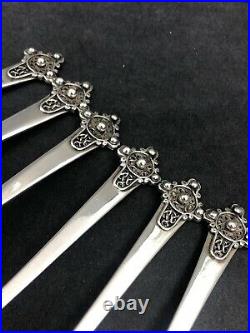 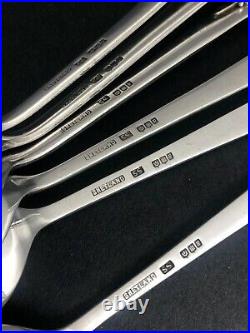 Scottish provincial silver tea spoons. Made by Shetland Silvercraft (Shetland) and hallmarked in Edinburgh in 1963.

Situated in the beautiful Shetland Isles, Shetland Jewellery (originally know as Shetland Silvercraft) was founded by Jack Rae in 1953. Jack Rae trained as a Jeweller in Edinburgh, later establishing his own business in St. He was one of the first in Scotland to achieve the prestigious qualification of FGA Fellow of the Gemological Association.

In 1945, Jack Rae and his wife Margaret moved to the Shetland Isle of Foula; the most isolated island in the British Isles. Jack worked as a lay preacher and Margaret as a teacher at the Foula Primary school with a school roll of eight (all boys).

In 1949, Jack Rae, along with his family, moved from Foula to Weisdale in the mainland of Shetland, and in 1953 started this business, known then as Shetland Silvercraft. Jack took on a young jewellers apprentice that same year - Jim Moncrieff. Jim remained with the company until his retirement in 2001.

The item "Scottish provincial 6 sterling silver celtic spoons by SS Edinburgh 1963" is in sale since Saturday, July 3, 2021. This item is in the category "Antiques\Silver\Solid Silver\Cutlery". The seller is "smylers" and is located in glasgow, North Lanarkshire. This item can be shipped worldwide.